Robert Peraza grieves as he touches his son Robert David Peraza’s name at the 9/11 memorial on September 11, 2011.

The Star Spangled Banner sung at a memorial service for the victims of 9-11, St. Paul’s Cathedral, London, September 14, 2001. 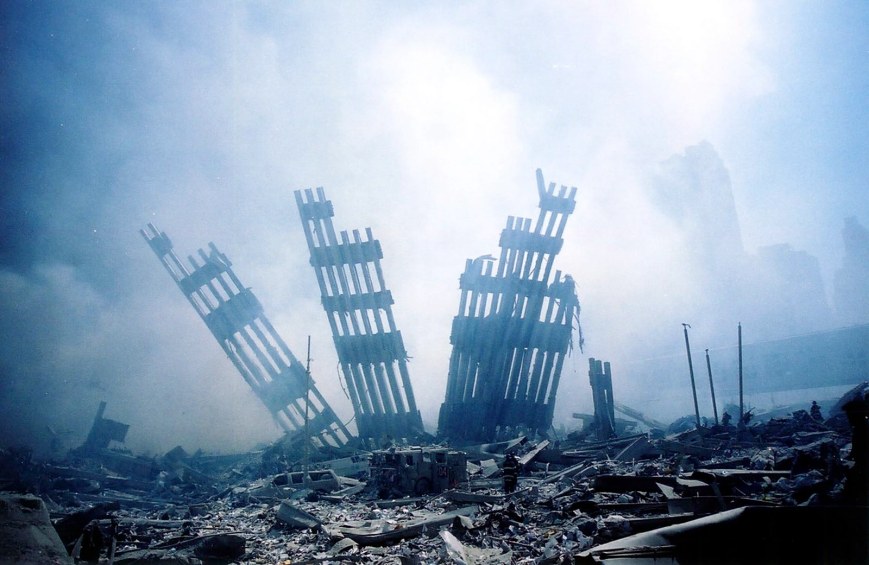 We Will Never Forget

In the end: 10 years, no second attack (which everyone assumed would come within months). That testifies to the other great achievement of the decade: the defensive anti-terror apparatus hastily constructed from scratch after 9/11 by President Bush, and then continued by President Obama. Continued why? Because it worked. It kept us safe — the warrantless wiretaps, the Patriot Act, extraordinary rendition, preventive detention and, yes, Guantanamo.

Perhaps, says the new conventional wisdom, but these exertions have bankrupted the country and led to our current mood of despair and decline.

My God, the rabid need Paul Krugman has to see others as moral inferiors has eliminated any ability he may have had to see reality.

One unfortunate current in the commemorations of the tenth year after 9/11 has been a widely promoted narrative that we lashed out, overreacted, and — through Afghanistan, Iraq, and the war on terror — not only lost our post-9/11 unity and “civility,” but supposedly alienated most of the world while playing into the hands of al-Qaeda.

In this regard, most unfortunate was the blog posting (replete with all the tired formulaic slurs about “fake heroes,” “hijacking of the atrocity,” “neocons,” etc.) by Paul Krugman today that reprehensibly scoffed, “The memory of 9/11 has been irrevocably poisoned; it has become an occasion for shame.” It most surely has not. Such an unhinged view would imply that we would have escaped comparable serial attacks without the provisions we took, and that Krugman’s view was widely shared by liberal politicians who at least since 2009 were invested with the ultimate responsibility of governance. Untrue on both accounts, as we just saw in Vice President Biden’s moving speeches about the act of war once declared on us by these “stateless actors” and his thanks to a previous administration for crafting a successful response.

So we forget both that we now have the luxury of such second-guessing only because some thirty major terrorist plots aimed at strategic U.S. targets were subsequently foiled through our new anti-terrorism protocols, and that the most prominent critique of the Bush administration’s national-security effort — mostly strongly voiced during Barack Obama’s long 2007–08 presidential campaign — quickly transmogrified into an official embrace of the Bush-Cheney policies during the Obama presidency between 2009 and 2011. Apparently the responsibilities of the presidency are not those of writing a blog.

And from James Taranto:

The memory of 9/11 has been irrevocably poisoned; it has become an occasion for shame. And in its heart, the nation knows it.

I’m not going to allow comments on this post, for obvious reasons.

As the Village Voice’s Nick Greene sums it up: “I need to get something off my chest today, but you can’t.” Blogger Ed Morrissey adds:

After reading this, you seriously have to remind yourself that the New York Times pays Krugman to write it; this wouldn’t even pass muster for a Letter to the Editor at most newspapers. It’s so trite, sad, and cliched that it’s hardly worth the effort to rebut. He’s mailing this in from 2003.

That may explain why, even a decade later, someone like Krugman sees 9/11 as an occasion to lash out at his domestic political opponents. “Everybody’s angry, to judge from my email, about Paul Krugman’s typo-burdened 9/11 screed,” writes Glenn Reynolds. (For at least 15 hours after Krugman posted it, the screed referred to “te atrocity.”)

Reynolds offers some advice: “Don’t be angry. Understand it for what it is, an admission of impotence from a sad and irrelevant little man.” Indeed. That post was monstrous, but it was trivial in equal measure. Paul Krugman is history’s smallest monster.