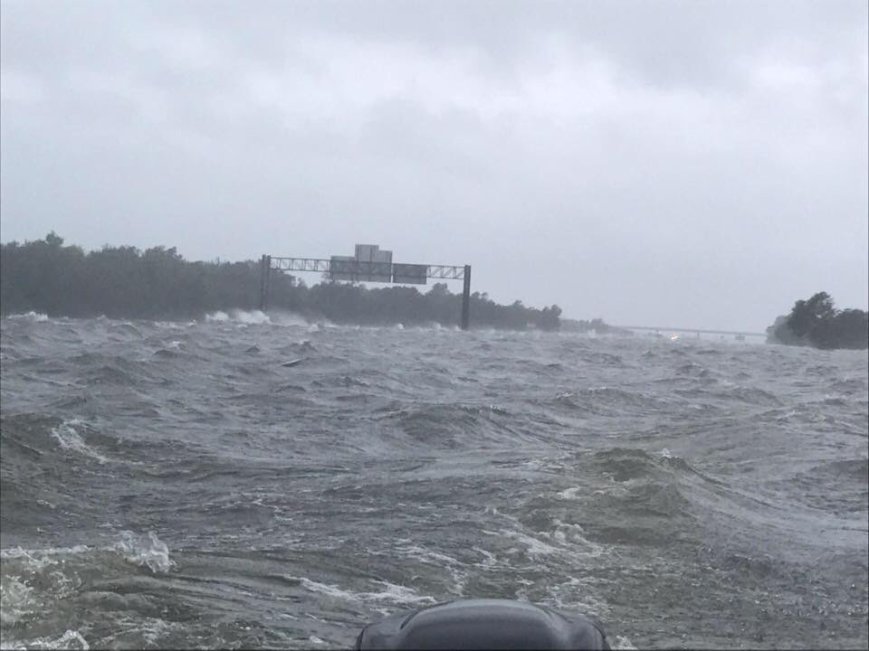 I did my best to keep my spirits up on Tuesday while guest-hosting America’s Number One radio show, but actually I was near overwhelmed by an awful sickening sadness, which is not the best disposition for broadcast entertainment. I woke up to the news that, during the night, in Baltimore, Maryland, the oldest monument to Christopher Columbus in the United States had been destroyed by someone called “Ty” and his chum:

A 225-year-old monument commemorating Christopher Columbus was vandalized early Monday amid the nationwide debate on removing Confederate statues and monuments.

A video posted on Monday shows the monument being smashed. It shows two unidentified people taping a sign reading “The future is racial and economic justice” on the monument. One of them then hits the monument with what appears to be a sledgehammer while the other stands next to the monument holding a sign that reads “Racism: Tear it down.”

“Christopher Columbus symbolizes the initial invasion of European capitalism into the Western Hemisphere. Columbus initiated a centuries-old wave of terrorism, murder, genocide, rape, slavery, ecological degradation and capitalist exploitation of labor in the Americas,” the video’s narrator, who identifies himself as “Ty,” says.

As you can see at right, almost every word painstakingly engraved on that obelisk has been obliterated. It stood for 225 years, and it was destroyed in the blink of an eye. Julia Manchester, The Hill’s reporter, continues:

That’s one way of putting it, but not an honest one. Mark Steyn Club member David Elstrom left a comment here that deserves to be more widely distributed:

I notice that the left media and even Fox News talk about the “discussion” on statues, or opine on the “conversation” concerning public monuments.

This Newspeak is apparently supposed to con the plebes into thinking something civil or democratic is happening. All I’ve seen is politicians or other apparatchiks rushing to remove statues (fearing the wrath of the mob) or actual mobs tearing things down.

If this is discussion, or conversation, then rape must be a “social event,” and sticking up the local convenience store a “financial transaction.”

Indeed. It’s hard to have a “conversation” with a guy wielding a sledgehammer. I was just sent a link to an Ohio newspaper purporting to report that one municipality was now “exhuming” the bodies of Confederate soldiers. I’m relieved to report that website appears to be fake. But it’s getting increasingly hard to tell. We live in a decadent age of totalitarian narcissism.

Corporate profits at California-based transnational corporations such as Apple, Facebook, and Google are hitting record highs.

California housing prices from La Jolla to Berkeley along the Pacific Coast can top $1,000 a square foot.

It seems as if all of China is willing to pay premium prices to get their children degreed at Caltech, Berkeley, Stanford, UCLA, or USC.

Yet California — after raising its top income tax rate to 13.3 percent and receiving record revenues — is still facing a budget deficit of more than $1 billion. There is a much more foreboding state crisis of unfunded liabilities and pension obligations of nearly $1 trillion.

Soon, new gas tax hikes, on top of green mandates, might make California gas the most expensive in the nation, despite the state’s huge reserves of untapped oil.

Where does the money go, given that the state’s schools and infrastructure rank among America’s worst in national surveys?

Illegal immigration over the last 30 years, the exodus of millions of middle-class Californians, and huge wealth concentrated in the L.A. basin and Silicon Valley have turned the state into a medieval manor of knights and peasants, with ever fewer in between.

The strapped middle class continues to flee bad schools, high taxes, rampant crime, and poor state services. About one-third of the nation’s welfare recipients reside in California. Approximately one-fifth of the state lives below the poverty line. More than a quarter of Californians were not born in the United States.

Many of the state’s wealthiest residents support high taxes, no-growth green policies, and subsidies for the poor. They do so because they reside in apartheid neighborhoods and have the material and political wherewithal to become exempt from the consequences of their own utopian bromides.

Blue California has no two-party politics anymore. Its campuses, from Berkeley to Claremont, have proven among the most hostile to free speech in the nation.

A few things keep California going. Its natural bounty, beauty, and weather draw in people eager to play California roulette. The state is naturally rich in minerals, oil and natural gas, timber, and farmland. The world pays dearly for whatever techies based in California’s universities can dream up.

That said, the status quo is failing.

The skeletons of half-built bridges and overpasses for a $100 billion high-speed-rail dinosaur remind residents of the ongoing boondoggle. Meantime, outdated roads and highways — mostly unchanged from the 1960s — make driving for 40 million both slow and dangerous. Each mile of track for high-speed rail represents millions of dollars that were not spent on repairing and expanding stretches of the state’s decrepit freeways — and hundreds of lives needlessly lost each year.

The future of state transportation is not updated versions of 19th-century ideas of railways and locomotives, but instead will include electric-powered and automatically piloted cars — all impossible without good roads.

Now, a third of the state thinks it can pull off a “Calexit” and leave the United States. Calexit’s unhinged proponents have no idea that they are mimicking the right-wing arguments of the Confederate states that prompted the Civil War. Like South Carolina residents in 1861, Calexit advocates seem to assume that federal law should apply everywhere else except in California. Many of these California residents also believe that the federal Environmental Protection Agency should always override local ordinances, but not so with another federal bureau, Immigration and Customs Enforcement.

South Carolina started the Civil War by shelling and capturing federal property at Fort Sumter in Charleston Bay. Calexit wannabe secessionists similarly assume that thousands of square miles of federal property — from California federal courtrooms and post offices to national parks such as Yosemite to huge military bases such as Camp Pendleton — belong to the state and could simply be confiscated from the federal government.

Calexit proponents assume California can leave the union without an authorizing amendment to the Constitution, ratified by three-fourths of all the states. And they fail to see that should California ever secede, it would immediately split in two. The coastal strip would go the way of secessionist Virginia. The other three-quarters of the state’s geography would remain loyal to the union and become a new version of loyalist West Virginia.

Buying a home on the California coast is nearly impossible. The state budget can only be balanced through constant tax hikes. Finding a good, safe public school is difficult. Building a single new dam during the California drought to capture record runoff water in subsequent wet years proved politically impossible.

No matter. Many Californians consider those existential problems to be a premodern drag, while they dream of postmodern trains, the legalization of pot-growing — and seceding from the United States of America.

A 10-page weekend memo by a former Google engineer called for a rethinking of the company’s “extreme and authoritarian” culture of “diversity and inclusion.” His reward? He was fired, of course, proving his point.

If you need any further proof that what software engineer James Damore said was true it was in the immediate reaction on Monday by Google to his screed. Damore said he had been fired for “perpetuating gender stereotypes.”

In making a plea for being treated as an individual, Damore wasn’t ranting, calling anyone names or making claims that couldn’t be sustained by simple recourse to a biology text or, even, to personal experience. Even so, his anodyne comments were treated as extreme ideological anathema, and he was instantly banished from the company for making them. Fired.

Be clear on this: Damore was only asking for tolerance of different points of view, including those of conservatives. He described himself as a “classical liberal,” which means he believes in reason, tolerance, freedom of conscience and the right of individuals to their own beliefs.

He was careful to note, too, that he is not inimical to much of what Google’s authoritarian culture now imposes on its workers: “I value diversity and inclusion, am not denying that sexism exists, and don’t endorse using stereotypes.” What he did oppose was the one-size fits-all culture of victimhood and deified diversity that the company, like much of the rest of Silicon Valley’s tech culture, forces its employees to adopt.

He didn’t demand acquiescence to his own views. He merely asked for an “honest discussion” of the fact that we are not all mere emblems of different victim groups, but rather individuals, and deserve to be treated as such.

“Google’s political bias has equated freedom from offense with psychological safety, but shaming into silence is the antithesis of psychological safety,” Damore wrote. “This silencing has created an ideological echo chamber where some ideas are too sacred to be honestly discussed.”

Yet in the end, Damore said, he was fired for the odious crime of “perpetuating gender stereotypes.”

Damore’s firing only adds an exclamation point to his reasoned remarks. And Google executives jumped on the bandwagon, issuing remarks to show just how “woke” and completely brainwashed they were into the company’s ideology. It’s sickeningly reminiscent of the bad old days of the purges in the Soviet Union and the Cultural Revolution in China, when friends, colleagues and family were routinely compelled to publicly denounce and criticize those whose beliefs had suddenly become fatally politically incorrect.

Google will now be faced with the irony of being sued for its own intolerance. Steeped as it is in Silicon Valley’s culture of immense moral privilege, it doesn’t seem to understand that federal anti-discrimination statutes don’t allow companies to discriminate against someone for their political views. It’s not allowed. It’s un-American.

And who knows? As some have suggested, Google’s intolerant political monoculture and extreme dominance of its markets might tempt federal antitrust officials into taking action to break it up. In the interest of “diversity,” of course.

Google and others in Silicon Valley such as Apple have a creepy habit of lecturing Americans on their backward political and moral beliefs, while serving as authoritarian nannies for what we read, write and view. They pose as guardians of personal and intellectual freedom, but are really centurions of the new censorship, stifling debate and thought itself.

In Google’s case, its Orwellian insistence on a kind of progressive groupthink is beyond creepy — when magnified across dozens of politically correct corporations across the country, it poses a danger to our nation and its precious freedoms. The chief diversity officer of Google, Danielle Brown, wouldn’t even link to Damore’s memo, claiming “it’s not a viewpoint that I or this company endorses, promotes or encourages.”

Apparently, neither does the rest of the tech world. As Elaine Ou, a blockchain engineer at Global Financial Access, pointed out in Bloomberg: “Past and present colleagues chimed in over the weekend with calls for (Damore) to be ousted. Media outlets like TechCrunch, Gizmodo and Motherboard jumped on board to declare the memo an ‘Anti-Diversity Manifesto.’ It appears that the ideological echo chamber extends beyond Google’s campus.”

This is indeed a major problem in a country premised on the sanctity of free speech and the right to one’s own opinion.

Sadly, Google’s is the kind of thinking one expects from totalitarians, not from those who prize intellectual freedom, the right of dissent, and an open society based on reason. Google and all the rest of the anti-freedom left should be deeply ashamed of itself. If this is “woke,” maybe it’s time Google went back to sleep.