Ever increasingly “fair” Venezuela displays again the totalitarian nature of Leftism and gives us a window onto what our hope and change leftists would do here if given the chance.

CARACAS, Venezuela — Venezuela’s President Nicolás Maduro intensified his perceived fight Monday against “bourgeois parasites” he accuses of an economic war against the socialist country by threatening to force more stores to sell their merchandise at cut-rate prices.

National guardsmen, some of whom had assault rifles, were positioned around outlets of an electronics chain that Maduro has ordered to lower prices or face prosecution. Thousands of people lined up at the Daka stores hoping for a bargain after the government forced the companies to charge “fair” prices.

“I want a Sony plasma television for the house,” said Amanda Lisboa, 34, a business administrator who waited seven hours outside a Caracas Daka store, similar to Best Buy. “It’s going to be so cheap!”

Five managers of electronic retailers including Daka are being threatened with prosecution for unjustifiable price hikes, the Venezuela government said. More stores may be at risk, as well. Government inspectors were dispatched to check prices at an array of other businesses.

“This is for the good of the nation,” Maduro said, referring to the military’s occupation of Daka. “Leave nothing on the shelves, nothing in the warehouses … Let nothing remain in stock!”

Maduro said his seizures are the “tip of the iceberg” and that other stores would be next if they did not comply with his orders. Maduro is expected to win decree powers in Congress in the coming days that he says will be used to take over more businesses. 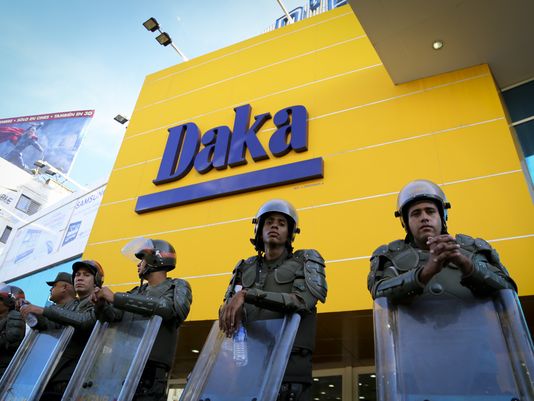