In the wake of the recent shootings, the liberal media have concluded we need more gun control. President Obama just signed 23 executive actions related to guns, and promises to do more later.

To them the logic seems obvious, that more guns mean more deaths, suicides, and accidents.

And the U.S. supposedly has very high murder rates, they argue, because our nation is teeming with guns. So with stricter gun control, we would suffer fewer murders and less violence.

As Charles Blow recently claimed in the New York Times: “America has the highest gun homicide rate, the highest number of guns per capita …”

Or as the New York Times earlier this month put forward the notion: “Generally, if you live in a civilized society, more guns mean more death.” The claim is all over the news from CNN to various “Fact Check” articles.

It would be nice if things were that simple. The evidence — and there is plenty of it — points to the very opposite, that cutting access to guns mainly disarms law-abiding citizens, making criminals’ lives easier. Guns let potential victims defend themselves when the police aren’t there.

First, let’s just be clear that lots of nations, including “civilized” ones, suffer from both higher overall murder and gun murder rates. Indeed, we are very far from the top.

Much of Eastern Europe; most of Southeast Asia, the Caribbean, and Africa; all but one South American nation; and all of Central America and Mexico suffer even higher murder rates than we do. For example, despite very strict gun control, Russia’s and Brazil’s homicide rates over the last decade averaged about four to five times higher than ours.

Indeed, if you are going to look across all nations and not just a select few, what you find is that the nations with the strictest gun control tend to have higher murder rates.

The New York Times and others have made much from comparing some arbitrarily defined group of “civilized” nations.

But even with the very questionable data on gun ownership that the Times prefers to use from the Small Arms Survey, the results do not imply the lesson that gun control advocates think they do for the U.S. 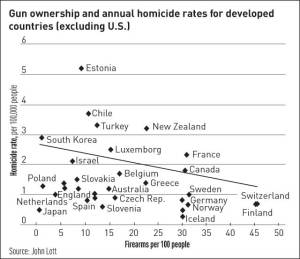 A similar pattern holds for all countries as well.

How is this possible?

Many liberals conveniently focus on a few low-murder-rate countries such as England.

Even worse, they ignore that the countries they idolize enjoyed even lower murder rates before they banned guns.

The seemingly most obvious way to stop criminals from getting guns is simply to ban them.

So what happened in the countries that banned either handguns or all guns?

It did not go well: In every single place that we have data for, murder rates went up. Chicago and D.C. provided spectacular failures within the U.S.

But this has been true worldwide. The U.K., Ireland and Jamaica, despite being island nations that can’t blame a neighbor for supplying guns, have suffered more murders after gun control was passed.

So what has happened when Americans have been allowed access to guns? Consider a simple fact. Concealed handgun permits and gun sales have been soaring over the last four years, as regular people have worried that Obama would push through gun control. Yet, murders and violent crime have been falling.

That isn’t just a recent phenomenon. If you look at the U.S. over the last few decades, even after accounting for other factors, the states that have had the biggest increases in concealed handgun permits and gun ownership have seen the biggest drops in murder and violent crime rates.